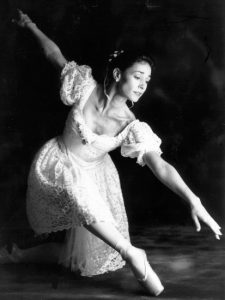 To laugh often and to love much;
to win the respect of intelligent persons
and the affection of children;
to earn the approbation of honest citizens
and endure the betrayal of false friends;
to appreciate beauty; to find the best in others;
to give of one’s self; to leave the world a bit better,
whether by a healthy child,
a garden patch or a redeemed social condition;
to have played and laughed with enthusiasm
and sung with exultation;
to know even one life has breathed easier because you have lived —

this is to have succeeded.
Ralph Waldo Emerson, philosopher and poet

Patricia Dickinson, Artistic Director of Festival Ballet Albuquerque, has been Director/Owner of Dance Theatre Southwest since 1995. She began training with Nancy Robison Stone and the Southern Ballet of Atlanta under Karen Conrad, formerly with American Ballet, and Pittman Corry. She was a scholarship recipient at the North Carolina School for the Arts studied at the Graham Conservatory in New York, and received a BFA degree with honors from Southern Methodist University. During these years, she studied with Madame Valentine Belova, and Nikita Talin of Ballet Russe de Monte Carlo. Ms. Dickinson danced with Dallas Opera and the Dallas Ballet, where she worked with such choreographers and teachers as George Skibine, Marjorie Tallchief, Arthur Mitchell and James Clouser. She was a founding member and co-Artistic Director of Dancers Unlimited in Dallas for ten years where she performed the works of Judith Jamison, Moses Pendleton, Bill Evans, Bill T. Jones, Matthew Diamond, Peter Pucci, and others. Her diverse training has allowed her to move comfortably in roles from the Sugarplum Fairy in The Nutcracker to more contemporary ballets. She performed in film and commercials and has produced fifteen record albums for the ballet classroom and three instructional videos. She served as Artist-in-Residence for the Dallas Black Dance Theatre and as Artist in the Schools for the Texas Commission for the Arts. She continues the “History of Dance and Discovery Workshops” program with live performances workshops she created for Texas and New Mexico elementary schools. She teaches master ballet classes throughout the country, and has served as a guest instructor at the University of New Mexico. Ms. Dickinson’s continuing teaching and choreographic career spans the U.S., Canada, Mexico, and Europe. She lives in New Mexico with her husband, Larry Wells, and son, Nicholas. She founded Southwest Civic Ballet in 1994 as a forum for young New Mexico dancers to come together and learn performance skills. In 1997, she became Artistic Director for the New Mexico Ballet Company, serving over eleven years in this capacity until 2009. She founded Festival Ballet Albuquerque in the fall of 2009 where she has choreographed and produced such epic ballets as Nutcracker in the Land of Enchantment, Dracula, A Love Story, Firebird Ballet, Billy the Kid, Coppelia, Midsummer Night’s Dream, Blue Jean Blues, and many more. Patricia has choreographed Firebird Spectacular for New Mexico Symphony Orchestra, Merry Widow for Opera Southwest, produced and co-choreographed Peter and the Wolf for NM Philharmonic, and choreographed The Soldier’s Tale and co-choreographed Creation of the World for the Figueroa Arts and Music Project. Patricia was proud to collaborate with Robert Mirabal and Jock Soto for the world premiere of the groundbreaking SACRED JOURNEYS in March 2018. In 2011, she was presented with the Bravos Award by Creative Albuquerque and the Dance Teacher Magazine Award for Excellence in Teaching (the only winner in the Private Studio/Conservatory category). She continues to travel nationally, choreographing and teaching classes.